A fishing trip in the Bay of Islands netted much more than a feed when the crew was treated to the spectacle of two humpback whales breaching near Cape Brett.

Kawakawa bus driver Kate Rogers, fishing with half a dozen friends on Queen’s Birthday Weekend, was hoping to hook a kingfish when, about 10am on Saturday, they noticed they didn’t have the water to themselves.

Just off Tiheru/Dog Island, near Motukōkako/Hole in the Rock, they spotted two humpbacks cavorting about 200m from their vessel.

The whales breached, or launched themselves out of the water, at least eight times.

The pair then swam off, passing about 100m from the stern of the boat.

Rogers said she had seen orca and false killer whales, and had once seen a humpback’s tail as the whale dived, but had never seen them breaching.

”It was amazing. Some of the crew had never seen a whale so it was even more special for them.”

Only Rogers’ 7-year-old son, who was fast asleep below deck, missed the action.

Humpback whales head up Northland’s east coast every year between May and August during their northern migration.

Numbers were decimated by whaling but are now slowly recovering. 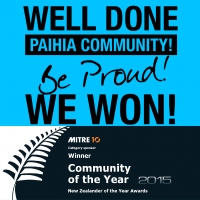